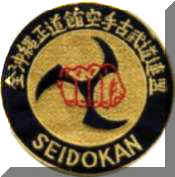 The Sensei Shian Toma born 26 November 1929. Sign is Sagittarius, married, has five children and is a grandfather. The eldest son of Sensei Toma. It is 6 º dan de Kendo, Team is part of Okinawa Kendo; Kendo champion having stayed numerous times Okinawa. Police Still profession today. The first master karate dojo Take what took Awase. He later moved to Koza (Current city of Okinawa) where it has been located for a long period of time. Near the base of American Air
Chain where the teacher played his job driving bus. Was located out the door 2 base and two blocks to the left. Initially, was a restaurant, later by not going well, was converted to the Hombu Dojo Seidokan up 1994 about. 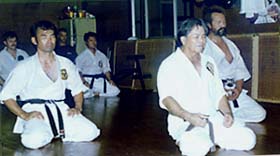 The master's house was above the dojo. Remains near the dojo of Master Toguchi (Shorei-Kan) Goju, then (1987) Goya was driving in an area later to move closer, an attic close to the door 2 Air Base Chain, both then and now is still led by Master Cuba.

The Master Takes retired from his work in 1989. He belongs to a generation of teachers transition although their methodology is the ancestral. Is inarticulate and not easily transmitted knowledge. In this part of the old masters. When asked after training by teachers or other curiosities, I never answered. So, in more than once, told me late at night: “The night we question
all you want, no problem.” And so it has done until today.

Del Maestro Shigero Nakamura told me: “When teaching people bodybuilding gym or not worried, but when he began working with karate, told them when they asked for it: is eating, to do gymnastics, etc.” I hope I misunderstood, because it implied that they were removed off. I also said: “Nakamura Sensei Shigero andaba, positions did. But Nakamura Sensei's discuss another time.” With Holan Soken told me how proud one day managed to disarm the Bo with a lock at the time determined that we were working, and etc.

Shian Toma begins his training to 16 years of age in the city of Osaka, Japanese land where he lived about a year during World War II. After his return to Okinawa he began to study under the guidance of his companion and friend, Shock
Shinjato, of all the friends being the most qualified to teach. Master Shinjato was student of the famous Master Chojun Miyagi (1888 – 1953), who founded the Goju Ryu system. He was also a student of Tatsuo Simabukuro, died in 1975, Isshin-Ryu founder and many others on the island of Okinawa. Toma Sensei has on numerous occasions in the early Karate had so many different styles as we know today. In those days, Karate in the Okinawa Karate Okinawa era simplemente hand cars.

Another interesting aspect of the beginning of Karate, is that most of the masters known a very limited number of katas. Indeed, it was rare to find a teacher who only teach a kata. But as they made comparisons and changes in kata, their number increased. Master Shinjato katas taught such as: Seisan, Sanchin, y una cataloged the Bo.

It's great Master Miyagi Sensei who learns Shinjato Sanchin, emphasizing on strong internal respiration. This differs from Sanchin Sanchin present in respiration as well as the hands move. El Sensei Shinjato, police profession was, studied under
leadership of the great Master Miyagi, while teaching at the Police Academy Okinawa.
An event occurred at this time was when Sensei Toma had the opportunity to perform the kata Sanchin before the grand Master Miyagi during a training session at the Police Academy.

Not to be confused with the Master Jinan Shinzato who represented Japan in Miyagi in the first Karate demonstration was held there and emerge later called Goju Ryu.

Regarding the above about the small number of kata, should not be understood to be practiced kata little. Sensei Toma supports and comments that took a year to learn and practice the kata Seisan before continuing with the study of Sanchin. Perhaps this is the reason that the old masters of Okinawa were very strict in implementing the katas.

During the sixties Sensei Toma was associated with the All Japan Karate Association (A.J.K.A.) at this time was a student of Seiki Toma ,being his training partners for this period Seikichi Odo, Fusei Kise, inter alia.

Seiki Toma was a student of the great Master Zenryu Shimabukuro. As an anecdote in an interview I did with Eizo Shimabukuro, Gran with 10 º dan y hermano of Tatsuo Shimabukuro, ISHIN founder RYU, Kyan Chotoku both students. When asked about Seiki Toma told me that he had submitted to Zenrio Shimabukuro.Que was also student of Master Kyan Chotoku. The latter was known by the nickname CHAN MIN (1870 – 1945). He told me that he had the ability Master Kyan climbing trees and jumping from one to another or as they hung from his feet with his head down in order to defend against possible enemies. Master Eizo technique masters perfectly as stated in photos he has . 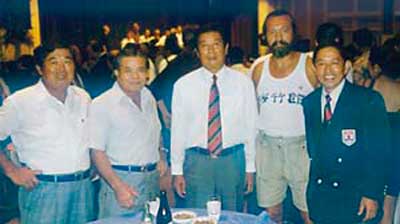 Okinawa has always been a lush but now the population increase is lost as unfortunately happens worldwide.

Master Sensei Toma Seiki Toma learned most of his kata, which practices and teaches today these are: Seisan,Wansu, Ananku, Pasai, Pasai Sho, Pinan (de I to V), Naihanchi,Chinto, Gojushiho, Kushanku, Sai Kata, Tonfa Kata. El Kama Kata, as I told the teacher takes the learning of a gentleman was much greater than, every time, showed it differently, until after a while he could finish in the most orthodox possible. This is all I know of makes Toma Soke Shorin Ryu.

In the mid-sixties there was a significant discrepancy in the All Japan Karate Association. The point of contention was the traditional method of full contact fighting and used in Okinawa. This type of fighting brought the use of armor-like
usadas s Kendo (Japanese fencing). It was less brutal and K.O. 's (out of action) were more frequent.

Since the A.J.K.A. primary goal was to integrate the Okinawan Karate, with the Japanese Karate, conflicts began to emerge as among teachers claimed the Ti Okinawa-te or Kenpo as their own.

The combat system used in Japan was and remains that of “no contact”. This variety was generally accepted by the AJKA. since I was taught how to fight, practiced and officially authorized. Many opted, Sensei Toma, by the system “hard” and indigenous. They felt that this was the true way of Okinawa. Sensei Toma has the reputation of being a strong man in karate and being a business man in the struggle both in the dojo and outside.

The discrepancy was also due to the name: KARATE, that they wanted Kenpo, jugando con los Kanji a la SANZA okinawense. Persiguian paternity of something that was indigenous, own. 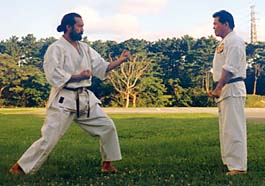 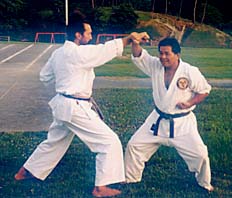 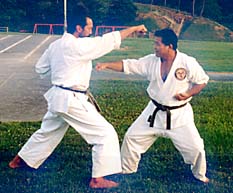 Okinawa Kenpo Association grew and flourished for a few years and disappeared with the death of the two aforementioned teachers. In 1969 this association were most illustrious teachers Okinawa which in turn had other organizations such as Hohan Soken. Kina Sensei.Uehara, Seikichi.Seiki Toma.Seitoku Higa Sensei,Kanei Ueichi y un
long etc.

Currently holds the name of Okinawa Kenpo Karate school run by the heir of Shigeru Nakamura, that has nothing to do with the previous organization except the word Kenpo.

It is during the period when most live under the same organization master, when the single largest number of technical exchanges and the opportunity to work with many other teachers and even change of teachers and school.

During this period takes Shian (1967) Pasha a ser miembro of the All Okinawa Karate Kobudo, headed by Grandmaster Uehara Seikichi. Master Uehara was and remains the head of Motobu Ryu system.

The name of Motobu Ryu had to be changed subsequently by Motobu Udundi Kobujutsu, as the former was registered by the son of Motobu Choki, that is the name by which we know the style of the master Choki Motobu. Chosei Master Motobu, son of the previous, is currently a student of Master Uehara and vice president of the Motobu Udundi.

The Motobu Udundi is a martial art of Okinawa, little-known, that strongly resembles the old method of fighting used by the Japanese samurai. It seems to Aikijutsu in unarmed methods, While defenses are more rectilinear. So, projections and Udundi Motobu dislocations are more like the old Aikijutsu of Japan, to do some comparison. As for the attack with fists and legs with Karate similarity is practically very little because locks do not exist or at least be avoided. The positions do not exist and everything is walking. The katas were not even teachers if they knew of other systems, This como Motu Ichi,. Ufukun, etc. Most basic katas were created by Seikichi Uehara, by changing needs, rather than teaching
itself. With respect to the arms there is a strong influence China.

Motobu Udundi is known by some as Go-ten-Te, whose literal translation is “hand palace”. This is because it was closely related to the kings of Okinawa for centuries.

I should point out that the weapons used by the great Master Uehara weapons include those normally found in traditional Japanese Bu-Jutsu. These weapons include the Katana (sword), Yari (lance) y Naginata (halberd). Thus, Motobu-Udundi kobujutsu and Bu-Arts Jjutsu are in line with the Japanese samurai tradition. They used weapons such as Sai Okinawa ,Tonfa, Nunchaku, kama. etc., China, Ryoba, Bantu, Yamaraji, etc.

Uehara Object Lessons, Toma Sensei learned regarding projections and dislocations, handling a large number of arms, and Iai-Jutsu (art of drawing). Today all this is incorporated into Seidokan. With the inclusion of these techniques, the Seidokan becomes a
complete fighting art, which includes everything related to Karate, al Toide, to Kobudo, as well as techniques Katana .

It is one of the arts that the student requires an open mind, force, flexibility and dexterity. El Seidokan, Teacher's own mouth of Shian Toma, Ju is a style ¨ ¨(soft). The jumps to switch to Neko ashi, or a skid to go to other positions show that we must practice the style as if you were small, agile and very fast. Remember Chotoku Kyan was very low. Today there are many schools located throughout the world: Spain, Kingdom
United, Greece,, NZ, Colombia, Norway, Belgium, Zambia, Zimbabwe, etc., besides Okinawa, Japan, U.S., who teach this complex martial art created by a man named Toma Shian. 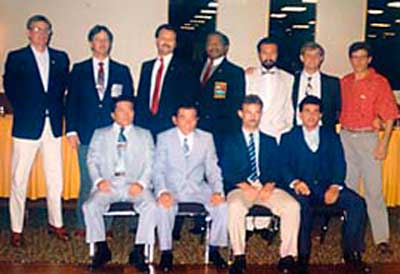 I met the teacher takes first in Philadelphia (USA) thanks to the presentation and recommendation of my friend and colleague Jerry Hobbs. In this country, the annual convention was held with all members of the system. I met Jerry Hobbs in Greece 1984 for about
international championships. Both perform demonstrations. I worked with him in carrying out his show as uke and collaborated with me in the execution of the kata of Judo Itsutsu no Kata. As he, responsible and gave me all the basics of Seidokan, which I appreciate since these lines.

That week was intense treatment since we lived in the home of Bob Teller (7º Dan), event organizer. The Last Days, after the show and the farewell dinner we retired to our rooms all the Holiday Inn. I say this because normally in USA or congresses Karate Championships are held often in the halls of such hotels, which for me was very new. Returning to the history, when I was in my room, Sensei sent the call to take something with them in their room, assuming that my acceptance as a student by Sensei Toma. Then we have been seeing one or two times a year sharing many hours of training and talk.