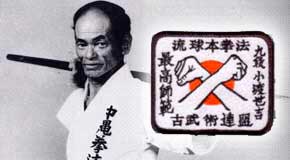 Born in the Agena 26 July 1926, Seikichi Master Odo is currently the most senior of the Okinawa Kempo in the world.

After the death of Master Nakamura, primitive organization disappeared and instead created the All Okinawa Karatedo Kempo, of the Seikichi Odo became the first president until Toketo Nakamura, son of the founder, took over.

Odo Sensei was promoted to the rank of 9th Dan 1 January 1975 for the Zen Okinawan Kempo Karate-Do Renmei. Descendent of Samurai family, in childhood was fragile, introverted and small stature. At 74 years remains small in stature but big heart. He started practicing Judo at the age of 10 years old, while at school. In 1939, at age 13 years old, started in Karate under the tutelage of Sensei Masusa, with the idea of ​​revenge on those guys who often teased and taunted him for being smaller than those of the same age. Today is one of the most humble and honored that I had the privilege of meeting. 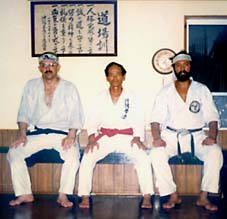 His second was a master Koho Cuba (1864-1944), in the city of Kawasaki, Okinawa. While learning with Kuba Sensei, and until his death, occurred in 1944, Seikichi Odo caminaba 50 minutes each evening, Agena desde a Kawasaki, classes for him.

Have attended the baccalaureate in (Okinawa) During the Second World War was still in its final years of school.

He began teaching karate in 1947, to 21 years old. Two years after learning dealt with Shinpo Matayoshi Kobudo (1923), living in Ishikawa. The young Seikichi also to walk the path from Agena to Ishikawa. Matayoshi now resides and teaches in Naha.

Odo's neighbors were already naturally in Kobudo coached it on the roof of his house.

Somewhat later began training with Toma Seiki (1920) s Koza, now known as the City of Okinawa. Master of Seiki Toma was Seoryo Shimabuku, which in turn was a student of Kian Chotoku (1870-1945). Toma Sensei lives in Awase.

In 1951 became a student of Master Shigeru Nakamura, in the city of Nago, with whom he continued until the death of Sensei. | During that time, Odo Seikichi three teachers received instruction at a time, Nakamura, Matayoshi y Toma. 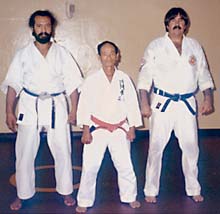 Odo Sensei worked at the American base (Marine Base), retired in 1987 and now his life is completely dedicated to the Martial Arts.

In 1970 fue VicePresidente of the Zen Okinawa Kobudo Renmei, one of the most respected systems of Okinawa Kobudo, Chinpo led Matayoshi.

As noted above Hamos, to the death of Master Nakamura, Odo became the president of the Okinawa Kempo Karate until the son of that, Toketo Nakamura, took over the leadership of the organization. In those years, Odo was Sensei 9th Dan System.

I met Sensei Odo in 1987, Miko through, Bob's wife Teller, a former American soldier who was on the island of Okinawa during 15 years old. Miko es nativa of Okinawa, and your family's neighbor Odo Sensei. Thanks to the kindness of Bob, Odo Sensei received us with great kindness and courtesy and we talked for a long time. From there he started training with. His assistant at the time was Dean M. Stephen, with which accelerated my learning process of the program.

Technical protection against direct attack fist: 1No Juji Uke Tai Sabaki doing right; 2No dislocation Ude Gatame to the ground; 3No immobilization; 4Back to Yoko º Fumikomi

That year, 1987, Odo Sensei had to undergo surgery because of a heart condition. Yet, over one afternoon he trained with us in his dojo in Agena and Base, often getting to be angry with me whenever fatigue accused him telling: “If you want to learn go to… or another and I bogged”. Actually I did not do anything to disturb. In one of the breaks I said: “Sensei, I have a 38 | years and I'm wrong. When you age, Who tells me I will not be worse?. I want to learn and to do that you need not do”.

Two years later I returned to find the Sensei Odo and I worked with him throughout my stay in Okinawa. This time his health was excellent, was completely recovered and that made their workouts were harder and complete.

Nonetheless, in this second game I could not win the friendship of Master Odo. By saying that I mean friendship, though I taught, I did not notice it with pleasure, although it should be noted that part of the generation of 60-70 years up. Over the years, Sensei gave me their attention and honored me with your love.

The Okinawa Kempo Karate has students scattered | everyone, especially in the U.S., which country I Seikichi Odo is a legend and traveling two or three times a year.

C.N.: How did your training and why?

Seikichi Odo: I started at 13 age, for at that time was the center of Okinawa Karate in the world and I had to be part of that.

C.N.: Who was your first teacher?

S.O.: Matsuda Sensei, was one of the first. With him, I learned a bit of Karate, pero no of Kobudo. Kokuba Sensei also taught me but he and his ‘ family went to Brazil, When he was 80 years old! I do not know if he's alive (laughter). After Matuyoshi Sensei taught me. Good, since then a long list of teachers formed my Martial Art.

C.N.: Where does the Okinawa Kenpo exactly?

S.O.: Is the Naha-Te. Currently everyone believes that the styles of yesteryear were far apart. This was not true! Teachers met and trained together. In those days people shared their knowledge and regularly looked. I benefited greatly from it and I could learn some real myths of tradition I conveyed their message.

C.N.: For example I learned from whom you. El San Chin Kata.

S.O.: Maestro de mi Nakamura. He said I should practice much because I needed to build muscle… I've always been very little thing… (laughter)

S.O.: In esta Kata Solo from 30 % Power should be in the upper body; previously done 9 movement to access the strong position of the legs now become less progress, but 70 % force is at the bottom.

The origin of the position comes from San Chin bulls, both his antlers as martial artist's feet closed-in, his feet too close when faced. For us the bull is a very strong animal.

Then followed an amusing confusion as we all tried to explain to the teacher what is the Ki Odo, word is / seemed thoroughly want to ignore. The more we struggled to explain the concept, more impossible it seems / to understand what. We write on paper, Master Sueyoshi Akeshi, that at the time we visited that day, also participated in the work of translation, we teach the Kanji… but to no avail. This was his response :

S.O.: I do not believe in the Ki. My teacher never said anything of the Ki; I think it is a personal knowledge of China. Some teachers who traveled to that country was imported but never the Okinawa Kenpo We trained under these concepts; that does not mean we do things unintentionally, only that such concepts were not present in our teaching explicitly.

C.N.: At any rate, Ki many people speak of it as something that develops over the years. With all his experience, Have you ever seen a technique to project without touching the opposite or something else wonderful and seemingly impossible?

S.O.: Good, I've seen more special was one of my teachers, it was thin and small like me, lift the tip of Bo 16 kilos of rice in a bag. He did without difficulty and was an apparently very weak, I used the bag as a training project.

C.N.: What is the difference between training days there in his youth and?

S.O.: Good, young people do not want to train strong, always want to have fun and feel relaxed, Okinawa training but in the old days was very hard, today this does not seem like anyone. We used to do a lot of strengthening fingers, hands of carrying pots full of water caught by the mouth of the jar with the fingertips ,we clasped the ground hard with ghetas lead that forced our muscles and harden our positions… All this has changed because the mentality has changed, is very difficult to find someone who is willing to work.

C.N.: What do you think of the training Makiwara?

S.O.: The Makiwara must be capable of receiving Flexible, this is very important. If it's hard to hit a wall as an impact on our body and lungs resent.

His training is something that also left out most of the young… I have it in my Dojo installed and young they look from afar. Today Makiwara not practice or rats!

C.N You is a recognized expert in Kobudo, art in which, so to speak, has the respect of everyone on the island, and of course the rest of the world. Tell us something of Bo. .:

S.O.: The origin of Bo is the one club we used to haul buckets in our work picnics. The elders who, On one occasion a Samurai, killed one of our teachers and cutting his piercing Bo with the same blow. For it is said that copied the Unicorn, a mythological animal with a horn long and hard to create the Sai. This is an instrument if much harder and therefore able to properly defend a sword attack.

C.N.: What would you say to young people, prospective traditional arts practitioner from these lines?

S.O.: Good, is difficult to imagine that listen to me…now have computers and nightclubs … there are many who want to practice traditional Karate.

When I was young we did not have any of that, we had fun climbing the mountains with huge lead ghetas, of which we spent several pairs a year, this is over, zilch now…

I have no message for youth, no hope for them, I think it's too late.

C.N.: But, Sensei! What if someone had the passion and strength and desire to train this art that would?

S.O.: I would tell them to practice hard that there are great advantages in this, and try and pass it to future… but this is unlikely.

C.N.: Thanks Sensei. Perhaps this video you recorded today can become the source of connection to people from other countries take over of their tradition.

S.O.: Thank you for your hospitality. I've been happy to do this work. 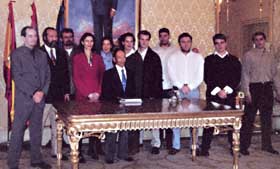 Course Participants, in the City of Salamanca. Not all participants are in a photo. Salamanca (Spain), on April 2000