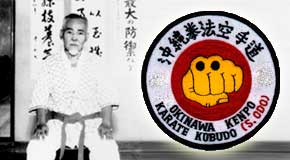 The system of Master Nakamura begins 1953. Its origins date from the late 1700, early 1800, being the founder of the saga the Bushi (Warrior) Sakiyama. 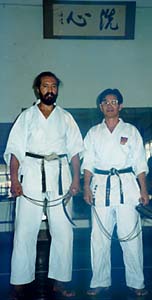 Sakiyama began studying Martial Arts in the Chugoku Kenpo system, under the guidance of two teachers in China: Iwa Ason y Roruku.
Sakiyama nace en Wakudo, Naha (Okinawa). Descendent of a powerful samurai family, China travels to where it remains a long period of time. On his return is installed in Naha, which merges the two styles: Te, he had learned during his childhood, y el Chugoku Kenpo, creating an efficient fighting style.

It is known that taught his son Kamerei Sakiyama. Éste enseñó a su vez a Tomigosuko y a Shinkishi Kuniyoshi. Latter, Bushi o Peichin Kuniyoshi, was a member of a wealthy samurai family.

The Master teaches a group of people being the most prominent Shigeru Nakamura (1893 – 1969). Other prominent members of the group are: Kamerei Sakiyama, Anko Itosu, Shinkishi Kuniyoshi, H. Chomo K. Yabu and other.

This story was passed by his son Taketo Nakamura, with whom I trained all the times I have been possible if I've been in Okinawa. The dojo is located in the city of Nago. I met the Master Toketo because I was invited to participate in the Festival which is celebrated every year on the occasion of the celebrations of the city. At this party presented him since I was trained in the city of Koza with Master Odo and was a member of Okinawa Kenpo. Once the introductions, le deseo mi formula to learn from him. Her answer was yes. Since then I started a series of classes agreed through phone calls to arrange time and day of training. From him I learned the Kama management with long cord, Itotsuki Examination As Nu-Te, this is how the Shoes (tillage tool), inter alia.

Toketo Master is a kind and good-natured. Although trained from childhood, is the death of his father when really works seriously, going to the school head. Years later the dojo becomes a large dojo, compared to existing in Okinawa dojos. It is of similar dimensions to the dojo of Sensei Eiichi Miyazato, en Naha (for those who have been there). Miyazato Sensei is a student of the great Master Miyagi.

With all teachers in Okinawa with whom I had the pleasure of speaking, atribuían el Yoki-Geri al Maestro Nakamura.

El Maestro Kohkichi, who studied agriculture at the University of Tokyo, was the director of the School of Agriculture and Forestry of Okinawa.

From his childhood he was familiar with the “Te-Te”, former name of Karate and Kobudo Okinawa.Estudió you for many years, Te teaching knowledge.

He checked a day that Te is very instructive from the point of view of education. Thus began teaching school students as PE Tea.

The Master Shigeru graduated as a schoolteacher. I began to practice under the influence of his father. He died too young, when he had only 10 age. Then studied under the tutelage of his uncle Teiichi Nakamura. which died years later in
USA.

After those events I studied under the tutelage of the great Masters Itosu Yasutsune (1830 – 1915), Kentsu Yabu (1863 – 1937), Shinkichi Kuniyoshi (Bushi o Peichin Kuniyoshi, descendant of samurais) and more.

Because his view of Karate-Do, Karate taught practical. This amounts to saying that emphasized “power” and “force” Part Karate.

At the same time was the first to propose and disseminate the “Bogu-Kumite” (kumite with protections) Japan. considered safer doing karate and dynamic ;many more people are inclined to practice kumite. He emphasized that the “Knock-Down” was the best way to discuss a fight, hoping that that system was released worldwide. He taught many people: to school students, townspeople, American soldiers and officers. And currently there are few active members who teach in and out of Japan.

In Okinawa reached a commendable position in the world of Karate-Do, dedicating the difundirlo. He also wished the future were an Olympic sport karate. He wanted everyone could try their skill and technique of Karate through the Olympics.

There are many stories about his life. Curiously, the episode in which remains quietly taking their food in spite of a sharp kama (en to Japonese) a ruffian kept before his throat. He had nerves of steel. 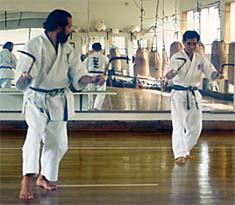 During a time of learning with rope Kamas (hands tied), in the city of Nago, en el Okinawa Kenpo Hombu Dojo.

The Master Shigeru Nakamura dedicated his life to Karate-Do. Much emphasized that “Martial Arts should only be used by a man of great character”, sentence spoken by himself; hence insisted that “we force us to complete our character”.

Considered “Hand of Justice” and “Hand Indulgence” as the essence of Okinawan karate fair.

Seikichi Kuniyoshi was the first instructor of Master Nakamura. Zenrio Shimabukuro studied under some of the same teachers, apart from his studies in Fukien (China).

Nakamura emprezó to give them certificates from 1924 – 1930. And after World War II when introduced into the English diplomas part.

Shigeru was the supreme instructor (All Japan Karate League Special Headquarters, 1964) and Zenrio Shimabuku was the president. In 1991 Eizo Shimabuku went on to hold the position of secretary.

Among his many students figure Seikichi Odo (1926 – ) maximum degree of the Okinawa Kenpo at the same time also mundo.Por Shian Toma was a student of Nakamura, but then changed . 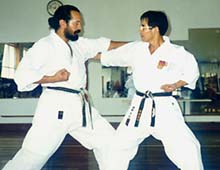 Hijo mayor de Maestro Shigeru Nakamura, continued the study of Karate-Do and the Kobu-Do since childhood. He also trained hundreds of people while serving in a company for a few years.
It has been considered as the great teacher of “Okinawa Kenpo Karate-Do” after the death of his father.

Master stressed that Karate-Do and the Kobu-Do are inextricably connected to one another. About this direction the Master encourages the hope that kumite is restored (combat) of “bo-jutsu” (style made with a stick of different measures).

El Señor Yasishi Nakamura, hijo mayor de Taketo Nakamura, has studied Karate-Do and Kobu-Do since childhood. He works in a travel agency. Study and practice karate and Kobu-Sun. He has had an important role in demonstrations Kenpo karate Okinawa. It is especially known for many people the power of his kicks. We look forward to their activities and development.