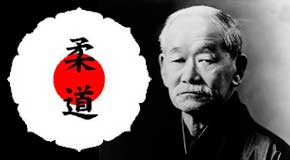 WHAT IS THE JUDO?

It is a sport . an art ,defense or fight ,social or recreational activity , a way of life.'s all this and much more .

The history of judo

With the fall of the Tokugawa Shogunate restores the Japanese empire 1886 .With the collapse of feudal society and the opening of Japan to advanced countries such as Europe and America .

And as a result of the Jujutsu discredited as a result of social change that Japan would experience needed to approach this whole samurai society similar activities but with a different purpose than the ancestral . 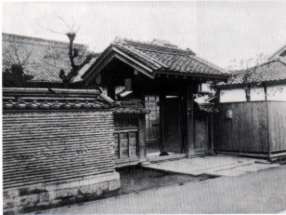 That is why, in this mess of loss of identity loss occurs Jujutsu and the like fall and compost suitable for the birth of the sport of Judo.

Explaining her Master Kano's why the creation of judo 1889 said :What I teach is not simply Jutsu "art" or jitsu "practice",Jutsu taught course but it's mostly from the "do" Top O path.

From Kodokan if fundado in 1882 and set at the same time the discipline of judo by its creator was none other, que of with Jigoro Kano. The beginnings were in a space not exceeding occupying a tatami dimensions 12 mats and nine students.

Judo in a few years was recognized as excellent, after the meeting held at the local police facilities dedicated to Bujutsu among athletes and members of Jujutsu Kodokan Judo . The meeting was between students Jujitsu school teacher Totsuka teacher and students belonging to the Kodokan Judo Kano .

They were selected 15 students in each school ,being the result of such an encounter favorable to Kodokan by 13 wins and two null. Since this is really the beginning of the rise of judo.

Prof. Kano promoted judo as Physical exercise nationwide. Proceeding to the organization and regulation Kodokan Judo. Anus Master becomes the first Asian member of the International Olympic Committee 1909 . Master Kano devoted his life to the expansion of Judo until the last days of his life.

Judo became an Olympic sport at the Olympics 1964 .

Judo to practice today in most countries of the world ,Kodokan Judo is created in 1882 by Master Kano.Tal and as stated in Article 1 of the International Judo Federation.

1860 The 28 October born in the village of Mikage ocean near Kobe.
1877 Is a student of Tokyo Imperial University. His first teacher was the teacher Teinosuke Jujutsu Yagi later studying with master Iso Hachinosuke Masatomo Fukuda and the Tenshin Shin Ikubo Tsunitoshi Ryu and Kito Ryu school.
1882 Kodokan Judo created a total of 9 students and space to practice 12 tatami plates
1889 Jigoro Kano relai<za a trip to Europe as a member of a ministerial commission Japanese imperial house. The first demonstration of judo in Europe was held in Marseille, France.
1890 Jigoro Kano gives a demonstration a delegation from the British navy. Tnato were excited that became the first ambassador, Judo in Europe . Meanwhile, the Japanese army judo school opened for its soldiers. One of the best student of the Master Kano was sent to the United States of America, ue in a short time and would enjoy great popularity.
1891 He was appointed director of the Ministry of National Education.
1898 He is chairman of the commission of Butokukai
1902 He was sent to China by the Ministry of National Education
1905 After Japan's victory against Russia reappears Nippon nationalism. During this time there were already two more judo organizations ,the Butokukai (The national martial arts school) en Kyoto y of Kosen.
1909 THE Kano teacher to pour the first Asian member of the International Olympic Committee. The Kodokan until then worked as a private entity was legally recognized as a public.
1911 Judo is included in the schools within the physical education program. Also created a section within the Kodokan to train teachers.
1912 Master Kano federation president sports Matsuito With the death of the Meiji era ends. Maestro kano participates in the inauguration parade in Stockholm Olympics ,Sweden. Champion and in the company of athletes such as Mas de Japón representative.
1920 Master Kano Assistance Olípico the Antwerp Games , Belgium. Demonstration in Marseille France.
1926 Hirohito ,es of coronado Emperador Japón .
1928 Teacher Assistance Kano to Amsterdam Olympic Games, Holland.
1930 Held on the first official championship Judo.
1932 Judo Demonstration in San Diego USA.
1933 Master Kano lectures at Paris' Ecole des Arts et Metiers. "Opens a new Kodokan. During these years the school has 119000 students ,of which more than 85.000 were black belts.
1934 Parnassus Society Conference ,Athens.
1937 Japan's War Against China .
1938 Introduced in Cairo preparations for the Olympic Games would take place later in Japan. Le death occurs on the trip back to Japan as a result of pneumonia when he was age 76 años a bordo del barco Kikawa Maru

The Kodokan judo school spread throughout Europe. Sending Teachers like Koizumi who taught in England where he opened his school named Budokai. The Maestro Hanno in Germany and later in Switzerland. Kawaishi in France and their respective influence on the Spanish judo.

The name has its roots in Buddhism meaning being center or place of meditation. The center should be as clean as possible, and must always reign in an atmosphere of peace and tranquility , preserving the place as a center of worship or mental training

The suit that is used while practicing judo consists of three parts, Jacket, pants and belt.

It is the most important part of the concept JU

There are two ways of greeting in judo.

The greeting not only be made between adversaries. Should be carried down the aisle or dojo preferential place where they feel the teachers and instructors , and all these.

The dojo is a place where one as mentioned above will be done physically mentally and spiritually ,where one must beware of bad gestures ,making noise and everything that may lead to the loss of serenity and good work on the premises. during practice or during combat student must always apply their maximum energy. Collaboration in the maintenance of the dojo and the neophytes helps students and students respect veterans., etc..

Moderate food drink and sleep
Refrain from eating and drinking during practice
Keeping the body and the most neat suit possible
Keep toenails and hands cut
Keep your mind as clean as possible to reconcile good sleep.
Dress appropriately and save the gi and wear flip-flops while off the mat
Students should not leave or enter the tatami without permission of the teacher during training.

The principles of Waza 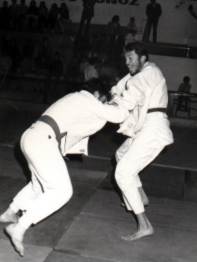 Theories tsukuri y kake are the explanation of the principle of waza. Tsukuri derived from Kuzushi which means the destruction of balance or posture of the opponent without losing our balance and prepared to carry out the attack. When the position or balance is broken by the Tsukuri we Kake projection.

When we are practicing Tsukuri y Kake , both rely on the fundamental principle of Seryoku Zen'Yô "mutual welfare and benefit" and Jita Kyoei “Maximum efficiency”.

The relationship between Kake Tsukuri and not only be applied from the technical perspective projections but in all other forms of training.

Kuzushi: Unbalance. This is indispensable to practice judo

The falls should be perfected before starting work Randori 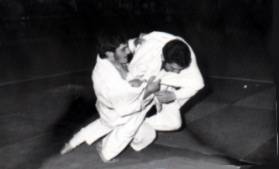 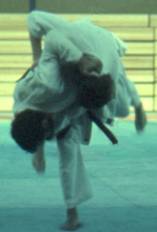 “Tsurikomi-goshi” was not included in the Go Kyo no waza according to the classification made 1895. seems to have been included at the end of the Meiji period around 1911.

ASHI The foot and leg

GUNS ONLY WORK WITH PERFORMING AT WORK KATAS

These are the eight basic katas worked at the Kodokan Judo : 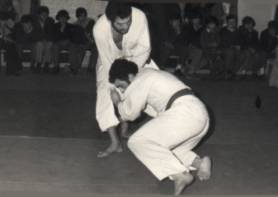 It takes just two contenders ,which one is in front of the other. Being one right next to referee and carries a red belt is known as aka while the opponent is known as Shiro , left is the referee and carries a white belt
The contestants salute the referee and greet each other to further the referee announce hajime or beginning.
– The fight continues until the time inspired or when one of the competitors marks an ippon (Point).
– The duration is usually normally fights three minutes.
– The referee can stop the fight at any time saying Matte (Stop) o cancel (Time)to whose voice the contestants return to the center of the mat. If there is no penalty or marks from any of the contenders,continuous fight again with Hajime.
– When a contestant has immobilized the enemy at that time the referee indicates Osaekomi means that the judoka has controlled the opponent and uses experisón immobilization Toketa when ceased to exist.
– At any time the referee can can use the expression I'm Mama that means not moving and fighting resumed saying Yoshi.
– At the end of the fight the referee ends the match saying Sode Made (this is the end), declared the winner. 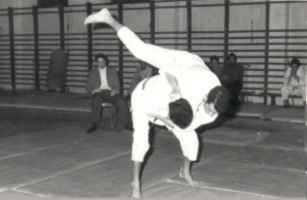 – When the technique performed in the execution approximates an Ippon .

– When the opponent is penalized one Keikoku .

– When the brand Judoka a technique that is partially correct .

– When the Judoka immobilizes the opponent on the mat for a period of 20'a 24 '.

– When the opponent is judoka penalized one chui.

– When a Judoka applies a technique that does not reach the quality of Juko atener.

– When the opponent is penalized with Shido .